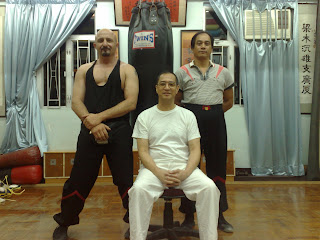 Hi brother! Can you tell us anything about your life? When did you start with Martial Arts?

Hi, I started martial arts when I was 8 years old. Personally I never wanted to do it but in a way I was obliged by my brother. We lived in Australia and we lived with heavy racism against the italian culture. Very similar to the way we have heavy racism against the many differing cultures that have entered the italian shores in the last 20 years. Basically as a child I lived with a lot of fear and even going to school was a nightmare. So I went to Jim Fung’s Wing Chun. We’re talking 1973 so I have a lot of nice memories

With who did you know Wing Chun style?


As I said Jim Fung was my first Sifu, sadly he has passed away. But through him I got the chance to know many instructors that reached a high level including Sigung Tsui Shun Tin and Wong Shong Leung. Being in Australia we had many migrants from China. I also trained very briefly with Felix Leong the highest ranked Sifu in Australia under Ip Chun.

Who were your Masters in the past? And now? 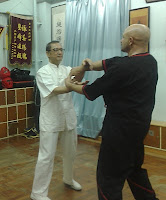 I have already named some but I had contact through either participations of Seminars, private lessons and or friendship, through the following, Sifu Fischer, Danny Inosanto, a good childhood friend, Vince Palumbo (founder of Arjukanpo a mix of Thai, karate, jiujitsu, boxe, DocePARES under master Cacoy Canete, and first Australian champion of the Tough man competition), Sifu Nino Pilla direct student of Danny Inosanto, William Cheung, Paolo Cangelosi, in Boxing, Nino la Rocca, Patrizio Oliva, Franco Delacquila, Russolillo, Yawe Davis, Maestro Speranza (buon anima) of the Fernet Branca, Sifu Tassos, Sifu Boztepe, Sifu Gutierrez, Sifu Sali Avci (very good Sifu), Sifu Delisio, Sifu Cesana, my brother Maurizio (an excellent Sifu), obviously Sifu Cuciuffo, Sigung Kernspecht, Master Bill Newman, Sigung Chen Chuen Fun, many students in Hong Kong including Robin Tsang and of course, SiJo Leung Ting, there are others but the list would be too long. I will include Sifus Graehme Kershner, Karen Armstrong and Sifu Albert who is one of the Headstudents of Sigung Tsui Shun Tin in Australia.


Are you a SiFu? How someone can become SiFu in your association?

Hey pay the money and you can be anything! No just joking, yes I was nominated as Sifu directly by SiJo Leung Ting in Hong Kong. I believe one becomes Sifu due to hard work and effort. One needs to deserve and merit the title. Also your direct master must have a direct contact with the way you work in order to judge your methodology and therefore being competent in judging whether you deserve the title or not. 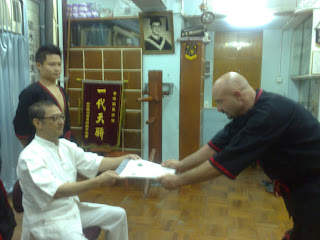 Obviously the European mentality may not agree with this mentality. The Italian term Maestro, is something that your students choose to call you when they feel comfortable with your genuinity and passion.


How many hours do you train?


Have you ever fight on a sport’s contest? When, where and with which results?
I fought in boxing matches in the 80’s never on a professional level. I can’t remember the places, but definately in Genova, Verona and South Australia. 10 fights 2 draws and 8 wins. Never by KO. Instead when I was about 12 years old the Wing Chun school in Adelaide would have full contact confrontations after lessons. Man that was really scary because we had people from other styles and we would put on chest protectors, head protection, shin guards and small fingerless gloves.
Honestly I lost more than I won and in that period I was heavily controlled by my fear because everybody was huge. Instead training with Sifu Fischer was like a nightmare. In each seminar we would always finish with full contact with very little protection, and there everything goes, I mean everything, so many times I would leave heavily bruised, split ribs, and chipped tooth. 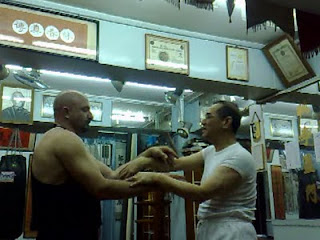 I tolerated this type of work for about 7 years however it’s not a method I would reccomend to anybody.

How many hours per week should train a student to grow in a serious way?

If, I repeat (IF) You have a good teacher I would reccomend about 8-10 hours a week.

What are the fighting concepts that are focalized on into your School?
Mostly mental concentration. Training your body to understand that the mind is the master. Training your mind and physique the concepts of obtaining a goal, to channel your energy efficiently to increase power. To learn the mecchanics of the body through the kinetic connections of mind, muscle tissue, tendon and articulation connections and how to utilise every millimeter of your physique to maximise results. I believe in building and constructing. Not destroying and damaging the body and the brain via countless bashing and smashing with unproductive sparring. 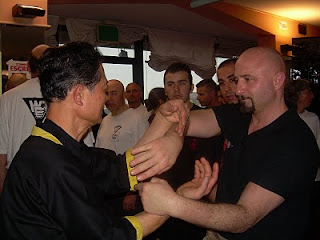 I’m not saying not to do sparring but one needs to attain a certain level of undestanding oneself. However studying antique fighting concepts and putting them into practice is not easy especially when you have so many have differing interpretations of GM Yip Man’s Wing Chun.

What are your thoughts on other SiFu and their methods of teaching?

I think a lot of people teach in part from their personal experiences. A lot of people know I made some provocative videos (see here – N.d.R.). In part to tell the truth and in part to have fun as was the case with Sifu Guitierrez. I believe he is mature enough to understand that. What I don’t agree with is what some Sifu’s do as in one case Iadarola. An 8th grade student of my brother with his friend magically became Sifus within 2 years under Iadarola. They were ranked as 4th level technicians and had even learned the Bart Chum Dao. I saw on their website they had even taken photos in front of the doors of the Hong Kong Leung Ting’s gymnasium without ever going in. Pretending to be his students. I rang them one day and with the loudspeaker of my cell phone I asked them if they believed if they were qualified to teach. They said (and I had 2 students listening as witnesses) they knew all the sequences but did not know how to apply them. I told them that they were cheating there students and they should be ashamed of what they were doing. Anyway after some disputes I hung up the phone. I feel it’s an offense to all the teachers who have put many years of sacrifice in their preparation.

Can you tell us the story about the “Fight Quest”? 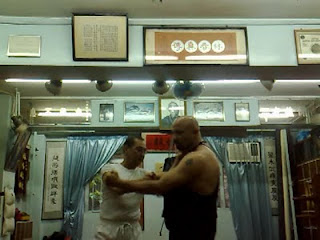 Man I knew you were going to ask me this one. It’s pretty simple. I was asked by SiJo Leung Ting directly to go to Hong Kong to fight Jimmy Smith. I was asked at short notice so I arrived in HK 36 hours later. I get off the plane, one hour before the fight. I arrive on the set and the director doesn’t want me because I’m not oriental, I get upset, SiJo gets upset, the director gets upset, and the only cool one is Jimmy Smith. He allows me to do a short film which him and I briefly explain that we can’t fight due to the director’s decision. They offer me to be part of the crowd during the shoot but I refused because I was too angry. As you know I was insulted and I took it personally. There was supposed to have been a challenge match with a chinese dude that was on the set. I was very impulsive and answered him agressively believing he wanted to fight me. I find out that the guy later wanted to only do demonstrative comparisons. In which we were supposed to show our techniques in a controlled manner. Before the comparisons the opposition told me that this guy was part of the triads or some similar crap to psyche me out, and I had to be careful because Hong Kong was a dangerous place at night. The night of the comparison, I tried about 3 or 4 times to show I was superior to him without hitting him as HE requested but at the 3rd attempt he tried to sucker punch me in  the neck in which at the end I lost my temper and started hitting him on the ground. As personal revenge I published the video as a wt man vs a wc man. After I got tired of explaining the story to people for the reasons you already know so I took the film off the web. There are no connections with the ewto trying to make a promo film. It was a personal issue.


Can you explain the points of the ‘Luk Dim Poon Kwan’?

I will always answer you with my personal interpretation. I love the long pole. It was a revolution in understanding bodymechanics and also generating power and energy at a longer distance. I believe the long pole is an important key in developing and enforcing everything you do in wing chun,tsun.

What can you tell us about the ‘Bart Cham Dao’?

Well for traditional use compared to what we use it for today are two different things. However if you imagine that from you elbows to your fingertips are approximately the length of the blades well I believe you can answer yourself in understanding that the Bart Chum Dao is a powerful tool in improving empty hand combat.

Thank you my man!

One Response to "Interview with SiFu Corti"